Bringing art to life in your community

The City of Burlington, in collaboration with Indigenous residents and local communities, has installed Bimose Agaming  | Walking along the Lake, an art walk featuring the work of First Nations, Métis and Inuit artists. Bimose Agaming is Anishinaabemowin, the traditional language of the treaty holders, the Mississaugas of the Credit First Nation.

Throughout Spencer Smith Park, electrical boxes have been wrapped with the artwork of Indigenous artists from across Turtle Island.  Visitors are encouraged to walk westwards to Lakeshore Road and Nelson Avenue, where an Orange Crosswalk has been installed to serve as a permanent reminder of Burlington’s commitment to Truth and Reconciliation.  From here, visitors may continue to the Joseph Brant Museum to explore the sculpture Conversations and Stories by David General, an Oneida/Mohawk artist and member of the Six Nations of the Grand River.

Burlington’s first Orange Crosswalk was unveiled on September 30, 2022.  This Crosswalk was created in consultation with Indigenous residents and local communities to serve as a permanent reminder of Burlington’s commitment to Truth and Reconciliation.  The road has been painted orange in honour of children of the residential school system.  This crosswalk acknowledges the strength and survival of residential school survivors, and honours the victims, their families and communities.

Throughout Spencer Smith Park, electrical boxes have been wrapped with the artwork of First Nations, Métis and Inuit artists from across Canada.  Learn more about the artists and their inspiration below:

Bronson Jacque is an Inuit painter from Postville, Nunatsiavut, NL, recognized for his highly detailed portraits in oil. Jacque began pursuing art seriously at age sixteen and is proud to be part of Labrador’s art scene, alongside his artistic family. Jacque’s works are known for their dreamy quality, a loose, hazy naturalism that is born of his own experience as a nearsighted child. Jacque’s work has been featured in numerous publications including Nunatsiaq News, the CBC and the Inuit Art Quarterly.

Candace Lipischak is a multidisciplinary artist and Métis workshop facilitator. Born and raised on Treaty1 territory, they are inspired by nature and their French Red River Métis-Polish background. Candace is an avid hunter/gatherer. Their company Fat Daug (short for Father/Daughter), offers unique and organic antler jewelry (available online and at the Winnipeg Art Gallery Quamajuk).

Self-taught, their visual artwork is connected to outsider art, illustrating unconventional ideas and materials such as antler, recycled tin and miscellaneous parts, Lipischak connects art with environmental and social issues, consumerism, the land, truth and reconciliation, and nature’s powerful force. Recycling,reducing their carbon footprint, and applying the phrase ‘what can I do with this?’ has expanded their mind in creating art using items that co-existed with nature.

Since 2015, Candace has had both solo and group exhibitions. Their work is part of various collections, private and corporate, such as TDS Law, Ceridian, as well as the Niverville Community Resource and Recreation Centre

Cody James Houle (he/him), also recognized as Stalking Heron, is an Anishinaabe artist. Raised in an unsafe home in the small military city of North Bay, Ontario, Houle had to generate his own sense of security and sustain his survival through a deeply intimate connection to nature. Being an artist is his calling and passion but being a father to daughter, Phoenix Raine, and showing her what it means to be an Anishnaabe’kwe is his ultimate priority in life. Growing up with intergenerational trauma and colonialism, Houle felt shame and guilt about being Native; now, his art allows him to show pride and strength in being an Indigenous man.

A self-taught painter, Houle is drawn to abstract visualizations and animate florals, it is the woodland paintings that resonate most for Houle and his sense of his culture. Houle believes it is important to share art to inspire hope and encourages anyone (especially youth!) to create for the sake of creating.

Doug Fox is an Ojibway painter painting on the Woodland School traditions. He cites Benjamin Chi-Chi, Richard Bedwas and Norval Morrisseau as his influences.  Fox is from the Wikwemikong Indian Reserve in the north-eastern section of Manitoulin Island in Ontario, Canada. The Woodland Style of Ojibwe native painting originated from Manitoulin Island. Its most famous member is Norval Morrisseau.

He had exhibited as Royal Bank of Canada BCE Place, Miami Art International and other prestigious shows.

Jerri Ellis-MacDonald is a Sayisi Dene First Nations Freelance Artist, Tattooist, Musician, and proud Mother. Self-taught to do realism portraits using graphite pencils at the age of 16, and completing a tattoo apprenticeship at the age of 19, Jerri has always strived to reinvent herself and grow as an artist. Over the past 12 years, Jerri has worked with various mediums, such as acrylic, graphite, digital painting, professional tattooing, and has had her artwork featured in Xalt magazine (2012), and on Bleeding Edge Tattoo Supply cartridge boxes (2022).

Having grown up in the 90’s during a time of radical change in feminism, it is not unusual to see that the strong female role model has become a common theme embedded within her artwork. But whether it be nature, psychology, films, music, family, or the human expression, Jerri is always finding beauty and inspiration within the world around her.

Mark Nadjiwan, a self-taught artist working primarily in pen and ink, is inspired by his First Nation heritage. His unique style fuses Woodland and Northwest Coast Native art traditions. In his work, the Woodland’s characteristic x-ray and wavy line motifs are interwoven with the clean form lines and geometry that typify Northwest Coast art. Mark’s First Nation roots are grounded in the Georgian Bay and Lake Superior regions. He and his artist wife, Patricia Gray, continue to live in the traditional territories of the Anishinabek Nation on the Saugeen (Bruce) Peninsula and he is a member of Neyaashiinigmiing Unceded First Nation.

Mark’s work addresses the environmental and political challenges facing our modern times. He has been pleased to be the Indigenous member of a small national team of academics, writers and artists lobbying to have the whiskyjack (Canada Jay) named as the National Bird of Canada.  Mark’s work can be found in venues and private collections across Canada, the United States and Europe. 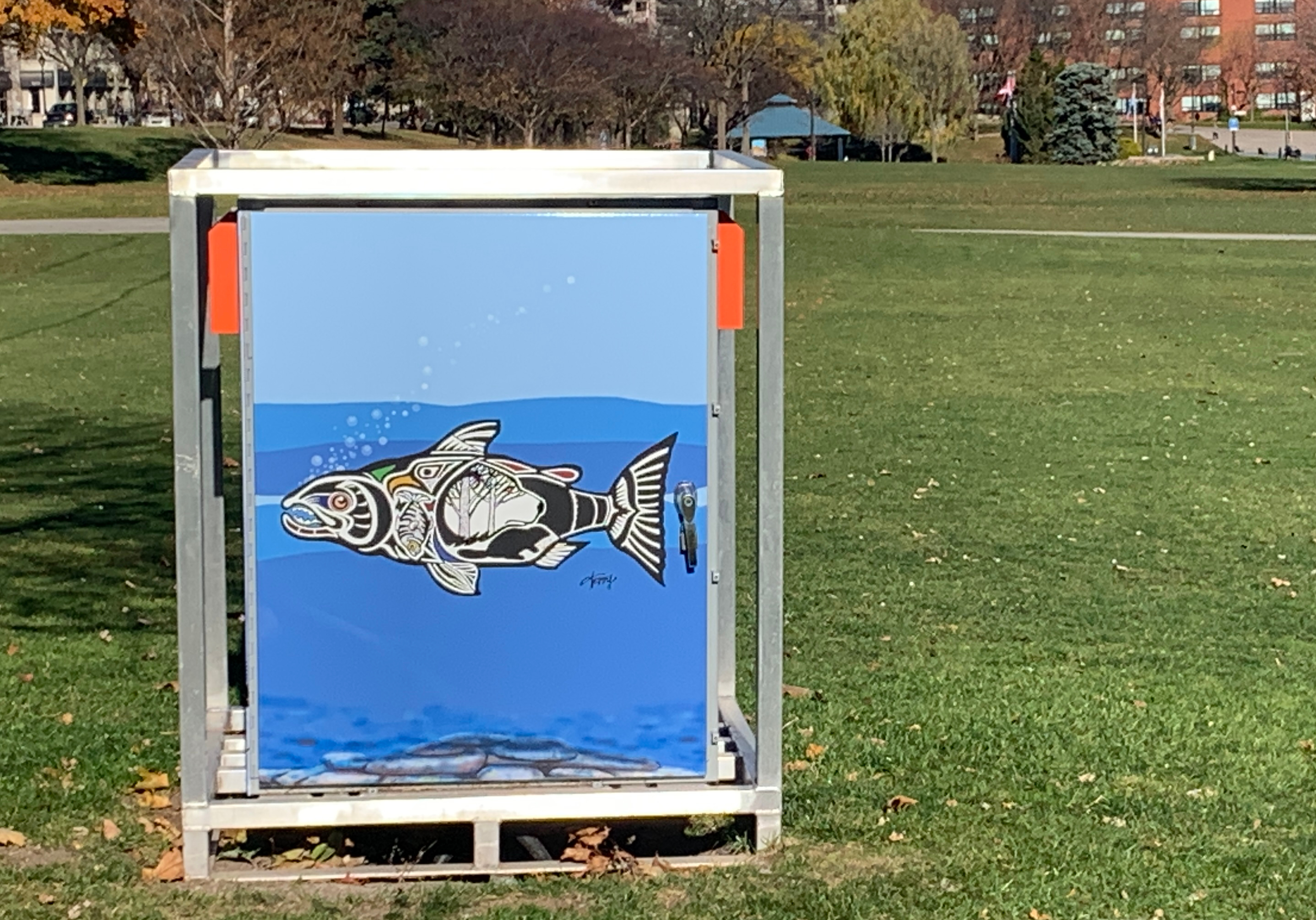 Marvin Terry, an Oakville-based artist, known for his past work as an editorial cartoonist working for several Canadian newspapers, magazine and websites over the years.  He now focuses a majority of his time exploring his Indigenous (Ojibwe) roots through art.

Moses Lunham (Anishnaabe) is a First Nations artist from the community of Kettle and Stony Point First Nation.  Realizing his “gift” at a young age, Moses loved to create and make art.  “In my youth, my parents would teach me how to create many traditional crafts.  They would take me to Pow Wows where I was inspired by what was taking place there.  I’d leave a pow wow feeling the need to create art for the next one.  My parents were my first teachers and they always made sure I had resources at hand for me to explore my creativity, to connect to nature and my culture.”

Moses studied graphic art and design at Fanshawe College and exhibits his work throughout Southwestern Ontario and on the pow wow trail throughout the summer months.  In 2015 Moses was awarded a Lifetime Achievement Award for his art from the Anishnaabek Nation.  “My work is a reflection of my people (Anishnaabe), their spirituality and ideology.”

Coming soon!  To be installed Winter 2022.  The City of Burlington has commissioned Ontario-based Indigenous artist David General to create a permanent public art piece for the entrance of the Joseph Brant Museum.  This project is funded in part by the generous donation of Dan Lawrie.  The artwork entitled Conversations and Stories, is a granite sculpture of two female figures walking to an event where they will share lessons their garments bear and answer questions the gathering put forward.